Truckload volumes remain well below seasonal levels both in terms of loads offered and loads moved and did little to prevent spot rates from sliding further into dangerously low territory for owner-operators and small carriers.

These are rolling national averages for the month through April 26 and include both a line-haul portion and a fuel surcharge. Rates have fallen throughout April; spot rates are negotiated between the carrier and the broker or shipper, and current averages will be lower.

Van trends: The national average van load-to-truck ratio was 0.94 last week, meaning there were more available trucks than loads on the DAT network for a third consecutive week. For context, the average van ratio in April 2019—the low month in a down year—was 1.45.

Compared to the previous week, the average spot van rate was higher on four of the 100 largest van lanes by volume. The number of loads moved on those 100 lanes increased 4.8%.

This week may tell a different story as certain restrictions expire, shoppers consider venturing out, and businesses restock.

Reefer trends: The reefer load-to-truck ratio moved up from 1.3 to 1.7 last week. The number of loads moved was higher on 14 of DAT’s top 72 reefer lanes by volume last week.

Most of those lanes originated in Florida, Texas, and Arizona, a sign that perishable fruits and vegetables are starting to move. Produce harvests are also ramping up in California, where strong crop yields could boost demand for trucks.

Two keys for carriers: whether food distributors and retailers are prepared to manage an influx of traffic and reduce the gate and dock delays that plugged supply chains in March; and whether commercial kitchens, restaurants, and other high-volume produce users can successfully reopen.

The national average price of diesel fuel fell 4 cents to $2.44 a gallon, according to the U.S. Energy Information Administration. That’s 73 cents less than the year-ago average.

Spot truckload rates are “all-in” rates; they theoretically combine a line-haul portion and a fuel surcharge. When fuel prices slip, as they have lately, the surcharge drops and the total rate declines accordingly.

This rolled-up rate has fallen far more sharply than the fuel surcharge has decreased for carriers hauling freight under contract, and it’s affecting the way some brokers price spot freight. When they see the price of fuel edging lower, they want to apply downward pressure on the spot rate as a whole. 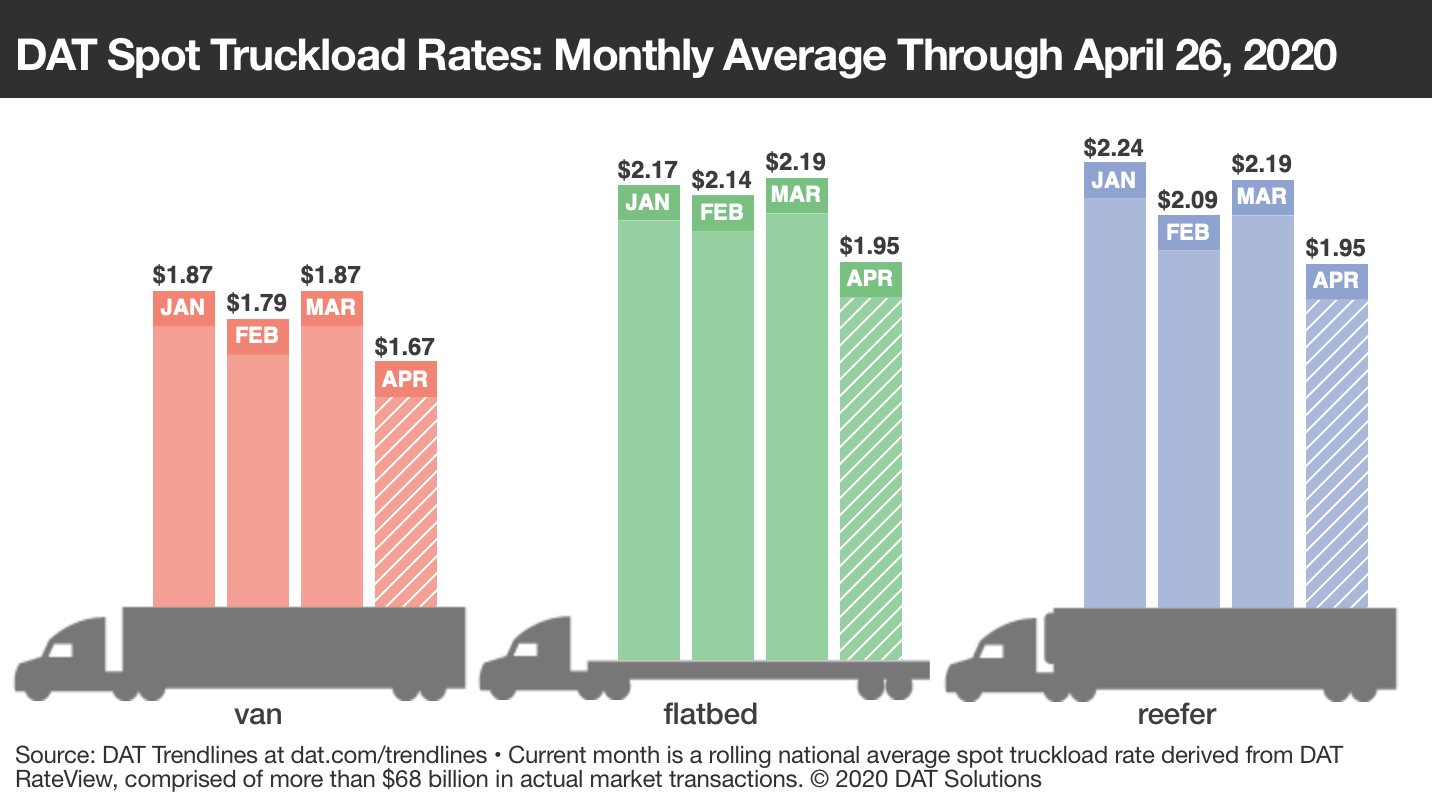